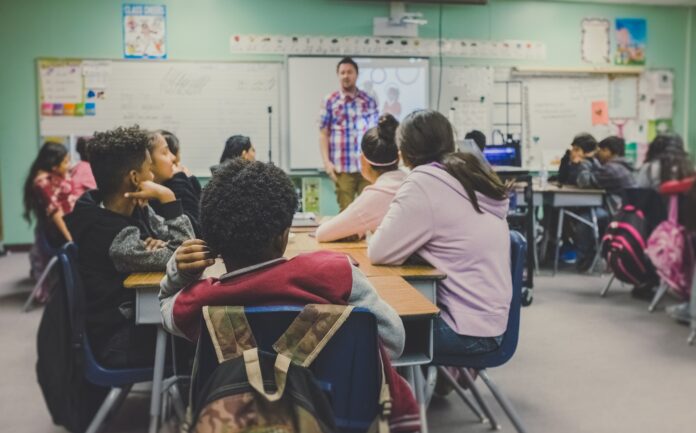 Isaac Newton discovered gravity — by himself — when an apple fell on his head. Or so they tell us.

A monk named Gregor Mendel had the time to watch peas grow day in and day out — and figured out the basics of genetics. Or so we hear.

Eli Whitney conceived the notion of interchangeable parts, and the world changed. Or so we learn in school.

Such lessons are familiar — rote, even. They are long-repeated tales of people who worked hard, became inspired and pursued hunches so doggedly that they changed the world.

These are the received narratives of American education. They form a tale of individually driven progress and innovation, as seen through the eyes of its groundbreakers: people who were usually white, male and —  more often than not — privileged and economically secure.

Now, in an era when the storylines that built the United States are being reexamined to their foundations and questioned fundamentally, K-12 educational systems are finding themselves facing questions of their own:

How do we educate with equity instead of perpetuating inequity? How do we tell these time-worn tales of progress while folding in the honest, often uncomfortable context that surrounds them?

And how do we build school cultures that are legitimately antiracist, where all learners are truly respected and encouraged to thrive?

“Racism is fundamentally a problem because it’s built in — both to the ways communities developed in the U.S., but also into the ways that public schools were developed. … No school, no district, no place is beyond or above that.”

— Dr. Lori Delale-O’Connor, an assistant professor of education at the University of Pittsburgh, during a recent Transform for Tomorrow panel discussion.

Since 1991, Teaching Tolerance has been helping schools embrace social justice in their teaching and their culture. In the months since George Floyd’s killing, the nonprofit has seen “huge growth in the number of people and schools reaching out to us for resources and professional development,” says interim co-director Monita Bell.

It’s encouraging that districts around the country have pledged to engage in explicitly antiracist curriculum and practices, Bell says. And yet there is no one-size-fits-all solution.

The problem of inherently racist structures in schools can’t be fixed overnight, she says. And it definitely won’t be solved by a list of tips in an article like this one.

With that reality in mind, there are some valuable places where experts tell us school communities can begin to create real change.

Drive honest conversations — and make them part of daily life at school.

Our country has grappled with racial issues for a long time. But we have spotty history of openly examining and discussing issues of racial discrimination — or about gender discrimination and anti-Semitism. Especially when we talk with children.

The nonprofit Facing History and Ourselves was founded because a Boston middle school teacher, raised Jewish in the deep South, realized that unless adults and children openly discuss the realities of discrimination, these problems will never be addressed.

Facing History takes a whole-school approach: “Everybody has to be part of this conversation,” says Dr. Karen Murphy, the organization’s director of international strategy. “Young people deserve the truth of the world in which they’re living.”

Facing History and Teaching Tolerance both encourage teachers and students to begin with self-reflection about their own identity and their experience with discrimination and systems of privilege. And they offer resources to support this work.

This isn’t simply an issue for history class either. Discussing racism and discrimination is just as vital in STEM classes, where groundbreakers and innovators have typically been presented as white and male.

Schools may be nervous about discussing such volatile issues. There’s a lot at stake. But the conversations are happening anyway, and this is an opportunity for educators to lead.

It’s so important to begin this process, Murphy says, “because we don’t even have a clear way of speaking about the issues of racism in our culture.” The road to tackling racist structures in schools is long, but open conversation between students and teachers, across all subjects and disciplines, is a place to start. | Photo by Allison Shelley for American Education: Images of Teachers and Students in Action

Actively add context to the teaching of all subjects.

Michelle Cody is now a math teacher at Willie L. Brown Jr. Middle School in San Francisco. But back when she taught science, she offered valuable context when she explained how Gregor Mendel discovered genetics while tending pea plants in the garden of his monastery.

Mendel, she points out, had the time and freedom to devote years of his life to scientific inquiry: “If you’re a monk,” Cody says, “of course you can sit there and look at peas all day.”

Economic privilege, she told her students, “plays into who gets to have the time to do scientific things.”

Math and science content has long been taught without any of this context. Even history classes often lack the complete picture: Generations of learners have grown up hearing about the white men who made history — with no mention of the women and people of color who weren’t allowed to attend college or hold positions of influence or have their contributions recognized.

Eli Whitney invented the cotton gin. But how many students, even today, are taught that this invention fueled the growth of slavery as it increased cotton production in the American South?

In every class, context matters.

While pursuing her graduate degree in education at Chatham University, Terri Martin worked with several mentor teachers. As a Black woman, she found that some white mentor teachers — even ones who seemed supportive at first —would undercut her authority in front of students and doubt her ability.

Student teachers must feel safe making mistakes, Martin says, and that can’t happen in a racist atmosphere. So it’s vital for schools to screen their mentor teachers before they begin working with Black student teachers.

It’s valuable to offer antiracism training for all teachers.

Schools may not know how to “call out folks who are damaging,” says Dr. ReAnna Roby, a scholar in the department of teaching and learning at Vanderbilt University’s Peabody College.

But somehow, Roby says, districts need to get comfortable with the awkward work of “uprooting some of the toxicity and some of the whiteness that has been used to make folks be read as inhuman or dehuman.”

Cecil Price III, an incoming freshman at Morehouse College, says students need and deserve a supportive atmosphere where they’re encouraged by one another and by their teachers.

As a student at a Pittsburgh Obama Academy, he saw that “there are many brothers and sisters who are talented, who are gifted, who are strong, that just needed an uplift. And that’s not what they have.” The work of creating antiracist schools begins with dismantling racism within teacher training pipelines. | Photo by Allison Shelley for American Education: Images of Teachers and Students in Action

Ask: Are diverse perspectives represented in your teaching materials and the examples they use?

Teaching Tolerance offers a text selection tool called Reading Diversity that helps administrators and teachers ask: Whose voices and perspectives are being taught in the readings at our school? Whose voices dominate and whose voices are being ignored?

Ideally, a district will reexamine the books and other resources they use. But even if they don’t, individual teachers can seek out diverse voices.

“The curriculum is set,” says Roby, “but you can bring in different texts.”

Michelle Cody has embraced this approach with her math students. She was offered materials that taught counting along the number line through an example involving a hot air balloon. She knew students in her city school had no experience with hot air balloons. But they did take trains.

Today, she teaches them using a story about a young girl who needs to take several trains in order to buy fresh groceries for a recipe, because her neighborhood doesn’t have a grocery store. As they plot the girl’s path 36 blocks north on the train to one store and 42 blocks south to another, they’re learning about positive and negative numbers — and about food deserts.

Although she began using this approach with children living in an urban food desert, Cody finds that children in affluent schools also learn from it. Those students, she says, “were like, ‘Wait. There’s food deserts?’”

As a Black student, Samira Pollard wanted to create a sense of community among the Black learners at her Pittsburgh-area high school.

“I felt that my senior year was the time to create a Black Student Union,” Pollard says, “so that black and brown students would have a voice.”

She asked a half-dozen teachers to sponsor the club. All said ‘no.’ They advised her to rename the club something less related to race, like the Multicultural Student Union or All Student Union, she says. Partly because of the COVID-19 disruption, the club has yet to be formed.

Things played out differently for Lauren Armant, who is a Black student at another Pittsburgh-area school with many white teachers.

After the killing of Antwon Rose Jr. by a police officer, Armant saw that many of her white peers at Pittsburgh Science & Technology Academy had little reaction to the officer’s acquittal. So she and four friends let their teachers know they wanted to organize a walkout.

“I just felt that push to try and do something,” she said, “because it felt like the death of an innocent black boy had become so normalized in our society. And that just didn’t sit right with me at all.”

Her school supported the walkout. As the students began marching, adults from the neighborhood joined them. Passing drivers slowed down, honked their horns, and shouted “Justice for Antwon.”

Through this peaceful protest, the students saw that their voices could be heard and encouraged by their community. They grappled with important issues, brainstormed their own approach and collaborated — all skills that 21st-century learners need to develop.

As our country navigates this moment of unprecedented change, this disrupted school year has many people seeking a return to familiar practices like gathering in groups at big school events or in full classrooms.

But this is a moment to guard against quick fixes, says Teaching Tolerance’s Monita Bell, and to refuse to return to any ‘normal’ that was rooted in injustice.

Which leaves every teacher with a question that vibrates with the moment we are living through: What will you do?

This article is part of a series for Tomorrow, powered by Remake Learning. From May to October 2020, Tomorrow will explore–through virtual events, grantmaking and extensive storytelling–what we can do today to make tomorrow a more promising place for all learners. Have something to add? Share your hopes for today’s young people using #RemakeTomorrow and tagging @RemakeLearning. Tomorrow will elevate community questions, spotlight your ideas and help all of us prepare for whatever the future may bring.

Getting Over Versus Moving On