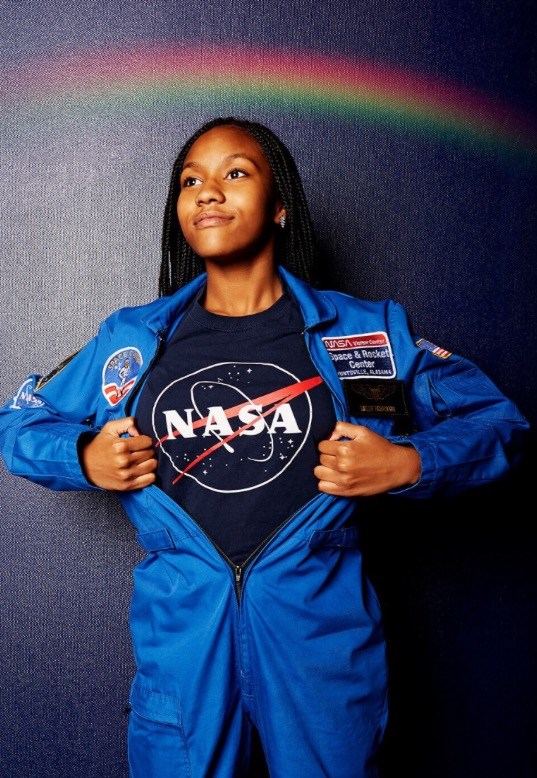 Taylor Denise Richardson is only 15 years old, but from taking even just a quick peek at her portfolio, you’d be surprised that she has been able to accomplish so much, at such a young age. Hailing from Jacksonville, Florida, Richardson puts the sun, in the sunshine state. She isn’t called Astronaut Starbright for nothing. She aspires to become a scientist, engineer, and one day, an astronaut. How is it that Ms. Taylor has it all figured out, when some of us millennials are still trying to get and pull it together?

Richardson has attended several NASA Space Centers, and is a member of the Mars Generation, as a Student Space Ambassador, Boys and Girls Club member, and member of Empowerment Resources Journey into Womanhood.

Richardson has covered a lot of territory in her journey with STEM. She has taken the lead with her literacy efforts, to make sure that kids have the books that they need to read. She has collected over 10,000 books and read to over 500 kids. In 2016, Richardson met her idol, Dr. Mae Jemison, and in the same year was invited to the White House State of Women Summit as a change maker. Later that year, she was
invited to the White House to attend a private screening of the movie, Hidden Figures, with the cast, producer, and First Lady Michelle Obama. From there, she was immediately inspired to raise money to send 100 girls to see the movie and to gift them a book. Richardson raise over $20,000 and sponsored screenings for boys in girls in
five states. This campaign inspired national campaigns across the country, where she raised $120,000. Oh, but it didn’t stop there. Earlier this year, she completed another successful GoFundMe campaign for Disney’s A Wrinkle in Time, raising over $110,000 and bringing over 5,000 of kids to see the movie, and get the book in the United States,
Ghana, and Australia.

From being featured on the cover of Girls in Aviation Day for the September 2017 issue, gracing the cover of Scholastic Science World for the October 2017, the May 2018 Scholastic Super Science issue, to being Teen Vogues 2017 21 Under 21, Glamour’s 2017 17 Girls Who Changed the World, to meeting influencers like Oprah Winfrey and
Ava DuVernay. Last but not least, Richardson attended and spoke at her first international event, Inspirefest, in June 2018.

She has been featured in local and national publications and TV such as Good Morning America, News 4 Jax, Times Union, Upworthy, Mashable, Introductions Necessary, The Mars Generation, Vanguard STEM, Stories in Science, Huffington Post, Glamour, Essence, Because of Them We Can, NBC Black, Time/Motto, People, Forbes, Women
You Should Know Girls, Twitter 2017, and 2018 Top 200 Women of a Color in STEM.

We had an amazing time catching up with Richardson, for an exclusive interview on all things Astronaut StarBright:

MillBuzz: What inspired your journey in STEM and your dream of becoming an astronaut?

Richardson: I’ve always been interested in stars since I was like five, but it was when I read Dr. Mae Jemison’s book “Find Where the Wind Goes”, that talked about her passion for science and space, that engaged me and lead me to raise money, to go to Space Camp, and follow my own aspirations of becoming an astronaut and engineer.

MillBuzz: You have accomplished a lot at only 15, what three things can those who are older than you learn from you about pursuing their dreams?

Richardson: Wow. Well it’s simple. Work hard, stay in your faith, in prayer, find your village, and build your own personal board of directors. You need people who will speak up for you. If you take care of your character, your reputation will take care of itself.

MillBuzz: We know that you have met some amazingly dope people. What is the best advice that you have received, and who was it from?

Richardson: The best advice is from Ms. Oprah Winfrey, and that is to be my true self.

MillBuzz: What are you currently working on, and what’s next for you?

Richardson: Well, I just started high school, so I’m currently focusing on that, and doing well. I am not home schooled, I attend The Bolles School. So, I must balance my school and my STEM work. Algebra and Biology are no joke! But I have great teachers! What’s next is studying, studying, and more studying.

Most recently though, I just came back from attending the Black Girls Rock! BLACK GIRLS LEAD Conference at Barnard College. It was amazing. It’s a seven-day residential international leadership program, for young women of color. The mission of the program is to offer girls ages 13 to 17, tools and resources to become dynamic
leaders, innovators, and public servants.

The BLACK GIRLS LEAD conference, is designed to affirm black girls’ brilliance, to cultivate their leadership skills, and to create a safe space for fellowship and sisterhood. We as girls, experienced culturally relevant workshops, panel discussions, guest
lectures and empowerment circles, led by world-class educators, artists, business moguls, research scientists, entertainers, and other influencers. I’m working on a blog about my experience so be on lookout for that. I also attended this year’s award show that will be aired this month.

I’m a part of an amazing group of friends, that uplift and support each other. We spread our joy and love of all things STEAM with others, and to encourage other kids to explore the world and universe around them. We are called The STEAM Squad. Check us out at TheSTEAMSquad.org.

Maybe another campaign for a movie screening in the works! I’m a huge Angie Thomas fan, and got her book “The Hate You Give”, while attending last year’s BLACK GIRLS LEAD conference, by Black Girls Rock! I read it, and it was so real and amazing. It’s the truth! So many young and black lives are succumbing to gun violence, that I feel
everyone should see the upcoming movie this October. It’s different from my last two screenings, which were more girls’ empowerment and STEM related. So be on the lookout for that!

In October, my friend Lana Taylor, who’s only 14 by the way, did a documentary on me called “The Story of a STEM Advocate”, and it has been selected to be screened in NYC this October 5th through 7th at the All American High School Film Festival. So be sure to follow her at LanaTaylor.com and see what’s next for her.

In November, as it’s Jacksonville ambassador, I’m looking forward to attending the annual Generation WOW event. It’s a program that focuses on the teen girl, sharing the lessons of the positive and the possible, through a year-long mentorship program. The
intergenerational connection of the leaders of today, with the leaders of tomorrow, is a powerful catalyst. Alongside the special GERALDINE mentor walk, the girls are given an opportunity to understand the value of mentorship, leadership, self-esteem, and service. It’s a great event! Those in Jacksonville, save the date November 14th,  and check out the link on how you can attend GenWowNow.org/register-now/.

I would like to make a StarBright doll, and maybe a picture book for kids.

MillBuzz: We know that you are big on being selfless and helping girls around the country and world. How can we support you with your initiatives?

Taylor Richardson Is an Inspiration to Millennials Everywhere

Daily Skincare Talk with Monique Rose of Milk and Honey