Recently we attended an event hosted by the ColorComm Washington, D.C. chapter at the political consulting agency, GMMB. We had an opportunity to speak with Dorothy Butler Gilliam, the first African American woman reporter hired by The Washington Post. The Louisville, Kentucky-raised Gilliam has been in journalism for more than 35 years, covering everything from segregation, civil rights, and even style from black culture. Not only is she a former reporter, but she’s an editor, columnist, author and educator who began her journey as a reporter for The Memphis Tri-State Defender. During her time there, Gilliam covered the Little Rock Nine.

It was absolutely amazing to sit down and glean from Gilliam’s expertise and years of knowledge in the journalism field. We are excited to share our conversation with her, as she opens up about her journey as a and new release of her latest book entitled Trailblazer.

MillBuzz: What inspired you to become a journalist?

Gilliam: What has inspired me most was the belief that journalism was going to help me see a lot of different worlds. Growing up in the segregated south in a loving environment where I was close with my family and my church was great. However, the segregated south was not a place you would want to live in forever. I started my first job as a journalist in Louisville, Kentucky, covering African American lawyer parties in their home that provided me a chance to see their Waterford Crystal China, as well as the infamous that made it clear to me that this is a profession that could take me places.

MillBuzz: When you first started working at the Washington Post as the first black woman reporter, how would you describe the atmosphere on your first day at work?

Gilliam: As the first African American woman reporter, I had been full warned when I finished the Graduate School of Journalism at Columbia University by professors that I had so many “handicaps” that I would probably make it because of my race and my gender. So on my first day, I felt like I was diving into a sea of white men with two invisible weights they didn’t have to carry. That instilled feelings of humiliation and indignity but I knew that I had to endure and make it in order for me to make room for the next black woman. If I didn’t, it was going to be really hard for other black women. Having such difficulties getting taxis because of my race as well as coworkers acting like they didn’t know me when they saw me outside of work made me feel like I was a maid. These were issues that could not be brought to the table as it would hurt the bigger cause.

MillBuzz: With more than 35 years of journalism, how has the industry evolved before your eyes as it relates to reporting political issues?

Gilliam: I began working in what’s called today the legacy media (i.e., The Washington Post, The New York Times) which are considered the big time newspapers. They are staffed by people that are experts that know and study focal point areas as a part of their job.  It was a place where I can bring black culture to larger newspapers as one of the editors of the style section and writing columns to make a difference. Today, journalism is a combination of legacy media and social media. Newspapers traditionally depended on advertising to continue to publish but now ads are in the social media space which makes newspaper companies much smaller. The big change is social media and when you need to cover politics, it’s a lot of opinions provided more than reporting the news of what is happening. Social media is very important but at the same time, it’s still a place for daily parse that people can have a tab on what’s going on in each of the Houses and Congress where you can expect to have in-depth reporting.

MillBuzz: What was your most life changing moment within your journalism career?

Gilliam: The ability to go from being an editor to writing a column was life-changing for my career because columns were not given out often to people. It gives people a chance to have an opinion where you mostly have reporting. It happened because I was ready to leave the style section and I proposed to my supervisor that I was interested in becoming the editor of the Sunday magazine.  I was told that nothing was going to be done with the Sunday magazine at that time. My supervisor then asked if there was anything else I wanted to do and at that moment, I didn’t have plan b and he offered for me to move to the metro section of the newspaper. I moved from the style section to the metro section and started writing features that I thought were good. After a few months passed, the editors shared with me that they thought I was ready for my own column. Sometimes the life-changing moment is not a moment you anticipate, but go where your heart and mind leads you. Things may not turn out exactly how you want but will prepare you for a more interesting challenge.

MillBuzz: What are three key points you would like for people to take out of your new book Trailblazer?

Gilliam: Three things I would like for people to take from Trailblazer are, I want young African Americans to realize the struggle that their ancestors and predecessors went through to afford them the life they have now. Sometimes I feel so annoyed with people of color from other countries because they are very critical of African Americans not knowing that we are the pioneering authority of the Freedom Movement that started with Dr. Martin Luther King, Jr. The Freedom Movement has impacted people globally because it has also opened doors for the LBGTQ & women’s rights movement. None of these things have never been questioned until we had civil rights and black power. We’ve been an integral part of America. I hope that journalists and other professionals will share their story. Not only are journalists not the enemy of the people, but they hold this democracy together.

Gilliam: Next, I will be traveling and promoting my new book Trailblazer.There will be another book that I will release that will show the columns I have wrote. I’m looking forward to a very rich future. 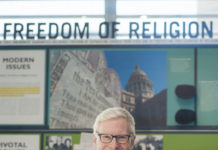 Nike Campaign and Their Support of Colin Kaepernick and Serena Williams