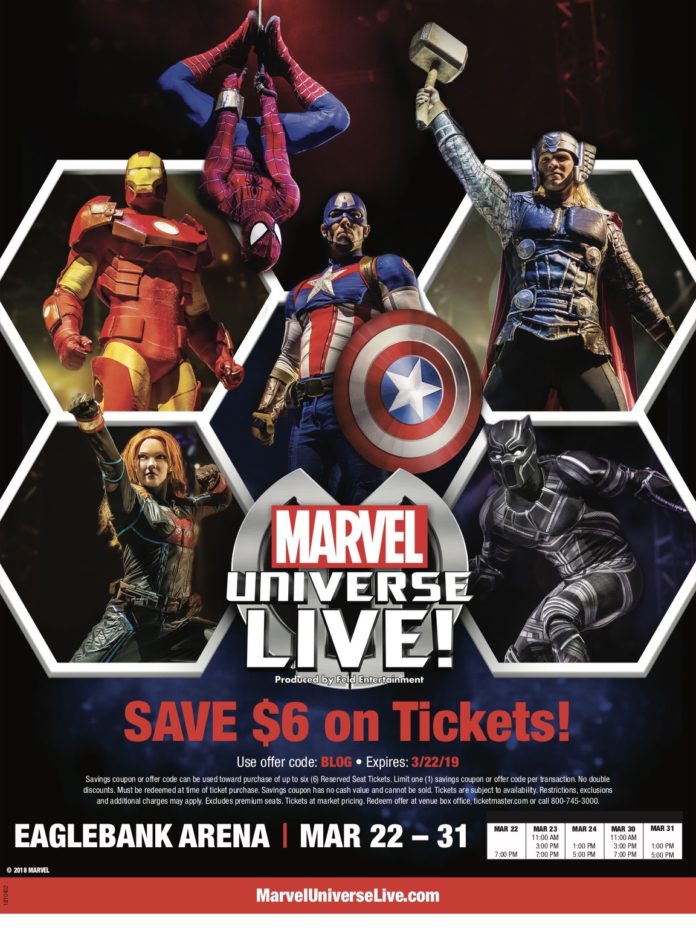 This was my first time attending Marvel Universe Live! My son has attended when he was younger, but honestly I don’t think he remembers because he was so young. However, we enjoyed every minute of the show. It’s none stop action, explosions, our favorite Marvel characters going after the villains, and of course having victory in the end. It was also a pleasure to meet the Spider-Man and snap a photo with him. He was just as friendly as he is on the big screen. My son was in Marvel heaven. He is a fan of all of the characters, but I think he’s the ultimate fan of Spider-Man, Iron Man, and Captain America.

Did I say that I love, all of them? It’s hard not too! I’ve been a fan since I was a kid. The show made you feel as if you were truly apart of everything that was going on. Each character had an opportunity to shine and show off their amazing skills as they do in the movie. It was hard to not think you were actually watching their movie, with all the creative stunts, fire, props, along with the overall setting. I highly recommend everyone whether you have little ones or teens to get tickets as it’s a spectacular show and action packed from beginning to end. We enjoyed it and so did everyone else in the audience. You do not want to miss it when it comes to your city!

Marvel fans, assemble for this live, action-packed, legendary battle to defend the universe from evil. Spider-Man, the Avengers and the Guardians of the Galaxy join forces with Doctor Strange, master of the mystic arts, in a race against time to recover the Wand of Watoomb before it falls into Loki’s hands. This ancient artifact holds immeasurable mystical power and would allow Loki to achieve his eternal quest to crown himself ruler of Asgard and Earth. This all new show unites some of Marvel’s greatest Super Heroes including Iron Man, Captain America, Thor, Black Panther, Hulk and Black Widow against some of the most threatening villains. Their journey sparks new feuds with old foes, pitting student against mentor, sister against sister and brother against brother. Witness cutting-edge special effects, aerial stunts and video projection in this incredible adventure. Fans of all ages will be immersed in the Marvel Universe and experience it all with their family…LIVE!

Additional fees may apply. Ticket prices based on market demand and subject to change.

Disclaimer: We are a Feld Family Ambassador, and in exchange for our time and efforts in attending shows and reporting our opinion within this publication, as well as keeping you advised of the latest discount offers, Feld Entertainment has provided us with complimentary tickets to Feld shows and opportunities to attend private Feld pre-show events.

WARRIOR RISING: How Four Men Helped a Boy on His Journey...

Daily Skincare Talk with Monique Rose of Milk and Honey

Discover Your Best SELF in Life and Business